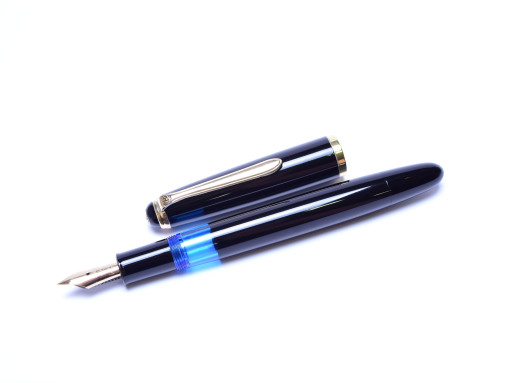 • Manufacturer/Model: Kaweco 807G/Germany
• Year of production: Late 1950s
• Filling system: Piston filling with Silicone cork
• Nib: 14K 585 Sold Gold Flexible EF size nib; Writes all larger sizes up to 3B triple broad
• Material: Plastic Resin
• Length (pen closed): Large and thick pen at 132.5mm; posted at 153mm; Diameter at cap's ring 14mm
• Condition and information:
This very special and rare Kaweco pen was made in the late 1950s. Together with the Elite, DIA was Kaweco’s top line product during this time. The build quality is astonishing, its entirely made out of black resin, the signature material of Montblanc, that gives the pen a unique shine. This is the best material to make pens from, as it does not scratch easily and always shines. The pen has that special torpedo shape form factor, which was typical of this era, it was actually the transition stage from the 1930s pen which more rigid forms, to this one, and later to the modern space era inspired designs. The pen is large, one of the largest in its lineup, and its also thick pen. This provides a very nice feeling in the hand, and balance. It has a large crack prevention ring which also extends on the inside of the cap to about 1cm. Unlike later pens it features a very distinct crown with Kaweco logo and a larger clip. It features a very useful and quite large translucent blue ink window. The nib is extra large and elongated, bigger then Montblanc's 144, 146, 342 and most models of the same era, and it's has full flexibility, thus it will write all bigger sized with the gentle push, and product the most amazing writing one can hope to achieve with a fountain pen, with thin and thick strokes on every letter. All trimmings are gold filled. Piston works perfectly, smooth and easy and takes an good amount of ink, so once filled it will last for a while. Crisp imprints on the barrel, still with their original gold color inlay. The pen is simple and efficient, practical, well balanced, with superb form factor, astonishing nib, and very reliable and easy to handle, with unique design and appeal, simply one of the best Kaweco pens all time. Perfect condition, no cracks, scratches of anything else, perfectly preserved piece of history and astonishing writer.

Kaweco history: There were times when the major European pen makers would look at a Kaweco pen first before making their own. Kaweco at the end of the 19th century and up to the 60’s, was one of the biggest pen manufacturers in Europe, everyone had a Kaweco pen, they stood out from the competition as they made the highest quality and best designed pens at the time. The company was founded in 1883 by two friends Luce Koch and Enßlen Weber in Heidelberger Germany, as Koch Weber & CO, thus KA WE CO. They had a great start and up to 1929 they had several thousand employees, with revenue at over a million DM. However, in 1929, the same year Pelikan patented their piston filler, Kaweco filed for bankruptcy. A considerably smaller fountain pen company known as Aurumia, bought the Kaweco factory, and decided to use the same name, Kaweco, as it was well known and admired by the people. Thus Kaweco thrived once again. By the end of the 40's Kaweco had at least one major retail store in all bigger cities, from London to Istanbul, and this was not the case with any other manufacturer in Europe. Kaweco made some of the most luxurious pens in Europe, the most expensive and high end pens, with extraordinarily build quality. Vintage Kaweco pens are some of the most desired and enjoyed among pen collectors.