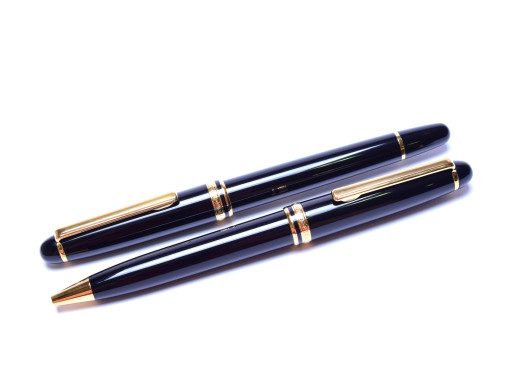 Condition and information:
Inoxcrom was one of Spain's most famous pen manufacturers, and at one time one of the largest pen manufacturers in Europe. Founded in 1953, this company grown under the leadership of its founder to make some amazing fountain pens, especially cherished in Spain where they held nearly all of the pen market. The company unfortunately did not survive after the death of its founder in 2003, after numerous attempts to restart it or sell the brand, the company ceased to exist in 2009.

Interestingly enough, this pen coincided  with those early times when the troubles for this company started, and it was also a real trouble maker for the company. Apparently the pen offered here went through at least 3-4 design revisions due to a legal dispute with none other than Montblanc it self. The original 1920 Caravel was launched in 1992, and there is no doubt it looked very similar as the Montblanc 144 (old), 145 (new), Classique, Traveller and similar Montblanc pens. To begin with, it had very similar form factor, similar clip, as well as the 3 gold plated bands/rings on the cap, one of which (the middle one) was wider and the other 2 rings were thinner, same as on the Montblanc pens. In addition to that it had the ring at the turning knob even though the turning knob did not had any function on this pen as this was never a piston filling pen. The pen is also made from black resin, and the original 1992 model also had a screw on cap. Did Inoxcrom had any Montblanc pen in mind when they designed this 1920 Caravel, it is hard to say, but one this is for sure, the pen did look like a Montblanc pen to the untrained eye. To make things even worse and more confusing, there were pens than that resembled the iconic Montblanc forms and style, like some Sailor 1911 and others, so this pen could be also seen as a similar to those pens too. Since Inoxcrom wasn't some fake pen reproducing company from the East, rather it was one of the pen making giants in Europe, Montblanc apparently launched a dispute directly with Inoxcrom, and they agreed to change the design of the pen. First one of the thin side rings/bands was taken off, and this made the pen look a little bit funny, as unfinished. Then (as in this pen) the bottom ring was moved on the edge on the cap and the middle ring was moved bit down. The pen also lost its thread-on cap, and now features a slip-on cap. From the start, the nib was decorated with a Spanish/Portuguese Caravel ship to honor the discovery of America, and the 1920 mark it is said to pay homage to the year the fountain pens were most popular in the world. In the first edition of the Caravel, the nib even though steel and gold plated, it was also two tone nib, again similar to Montblanc's two tone nib. Since they had many nibs already produced, they only made them one tone in gold, again in order to stray away from the Montblanc design.

And that leads us to the pens here. Many Spanish collectors will tell you this is a superior pen to Montblanc in almost every respect, and they might be right on some points, but of course not all. The pens are indeed a superb build quality, nothing short of 145, the build quality is feelable. They are slightly longer pens, they have a great grip and feel at home in the hand. Even though the nib is steel it does not fill stiff, it is soft rather with a nice smooth writing and pleasant feel. The pen can take any standard international cartridge or a converter (we will include a new converter with the pen), and the ballpoint any standard international size refill, the original is included as well as a new one. The ballpoint has a full solid brass mechanism, making it very heavy providing good feel and balance as opposed to cheap plastic pens. It also has a two directional on-off mechanism which is quite nice. The fountain pen's precise slip-on cap is convenient for ease of use and for fast deployment, no tread, always ready to use in seconds. The entire pen and nib unit can be easily disassembled to clean and maintain. These are definitely one of the often overseen star pens out there, worthy any and all attention and praise as they are simply superb pens in every respect. Timeless design (as proven by the dispute), superior build quality and a true legacy form once the largest pen manufacturer in Spain. Both pens are in mint condition with no signs of use, perfectly preserved.