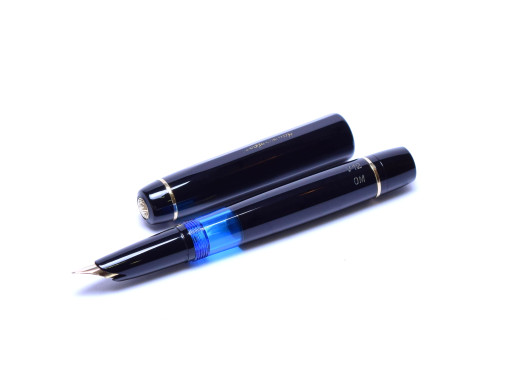 Condition and information:
One of the most famous Kaweco pens, the original Sport mini pocket size pen, model V12. This was the first 50s reincarnation Kaweco Sport pen of the famous 1930s Sport line. This is one of the rarest Kaweco Sports as it was made for a very short period in the mid to late 50s, after which was replaced with the Sport v16 model in the early 60s. Unlike the V16 which has more sharp, modern lines, this was still draws back to its original predecessor from the 30s, with more rounded ends and rounded semi-hooded nib. This pen is made out of black resin plastic, giving the pen a high shine and gloss. This is possibly the best material to make pens from, as it does not scratch easily and always shines. The pen is 12 sided (dodecagon), thus reflects any light that falls on it. The nib is superb, OM oblique medium, but its also flexible, it will write larger sizes with the gentlest push, one of the best writing nibs we've used recently. Gold plated trimmings and gold plated logo located on top of the cap. Compact but fully functional piston filling mechanism with silicone cork. Even though short when closed, the pen is meant to be used posted (with the cap placed on the top end), and since the cap is long, when posted the pen comes to a full normal length fountain pen, very well balanced and pleasant to handle and use. This from factor was first introduced by Kaweco in the early 1930s, and it was adopted many years later by other pen manufacturers such as Pilot and others. Amazing design and superb quality pen from Kaweco, the original Sport series, pens that will fit in any pocket and always preform perfectly. All new Kaweco Sport models are based on the original design of this pen. The pen is in absolute mint condition, no cosmetic or functional defects what so ever, 100% originally preserved.

About the Kaweco Company:
There were times when Montblanc, Pelikan or other European pen makers, would look at a Kaweco pen first before making their own. Kaweco at the end of the 19th century and up to the 70’s, was one of the biggest manufacturers in Europe, everyone had a Kaweco pen, they stood out from the competition as they made the highest quality and best designed pens at the time. The company was founded in 1883 as “Koch Weber & Co” by the friends Luce Koch and Enßlen Weber in Heidelberger Germany, Koch Weber & CO, thus KA WE CO. They had a great start and up to 1929 they had several thousand employees, with revenue at over a million DM. However, in 1929, the same year Pelikan patented their piston filler, Kaweco filed for bankruptcy, unbelievably as they could not sustain their enormous growth. A considerably smaller fountain pen company known as Aurumia, bought the factory, and decided to use the same name old name Kaweco, as it represented superb writing instruments. Since 1920's up to late 1970’s, Kaweco made some of the most luxurious pens in Europe, the most expensive and high end pens, extraordinarily build quality. By the late 1940's Kaweco had at least one major retail store in all bigger cities, from London to Istanbul, and this was not the case with any other manufacturer in Europe.